Victoria Sussens-Messerer of the Guardian reports that these fairytales were gathered by historian Franz Xaver von Schönwerth (1810–1886) had been locked away for over 150 years.

Eichenseer found 500 fairytales, many of which do not appear in other European fairytale collections. For example, there is the tale of a maiden who escapes a witch by transforming herself into a pond. The witch then lies on her stomach and drinks all the water, swallowing the young girl, who uses a knife to cut her way out of the witch. However, the collection also includes local versions of the tales children all over the world have grown up with including Cinderella and Rumpelstiltskin, and which appear in many different versions across Europe.

Von Schönwerth was a historian and recorded what he heard faithfully, making no attempt to put a literary gloss on it, which is where he differs from the Grimm brothers. However, says Eichenseer, this factual recording adds to the charm and authenticity of the material.

This site has links to some of the new fairytales which are being translated into English. 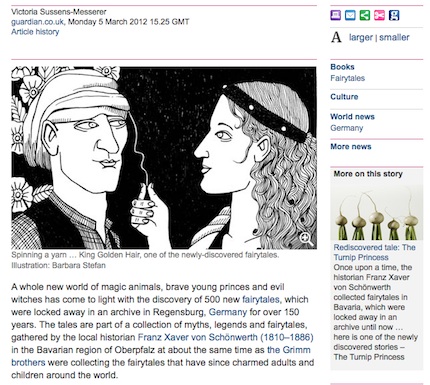